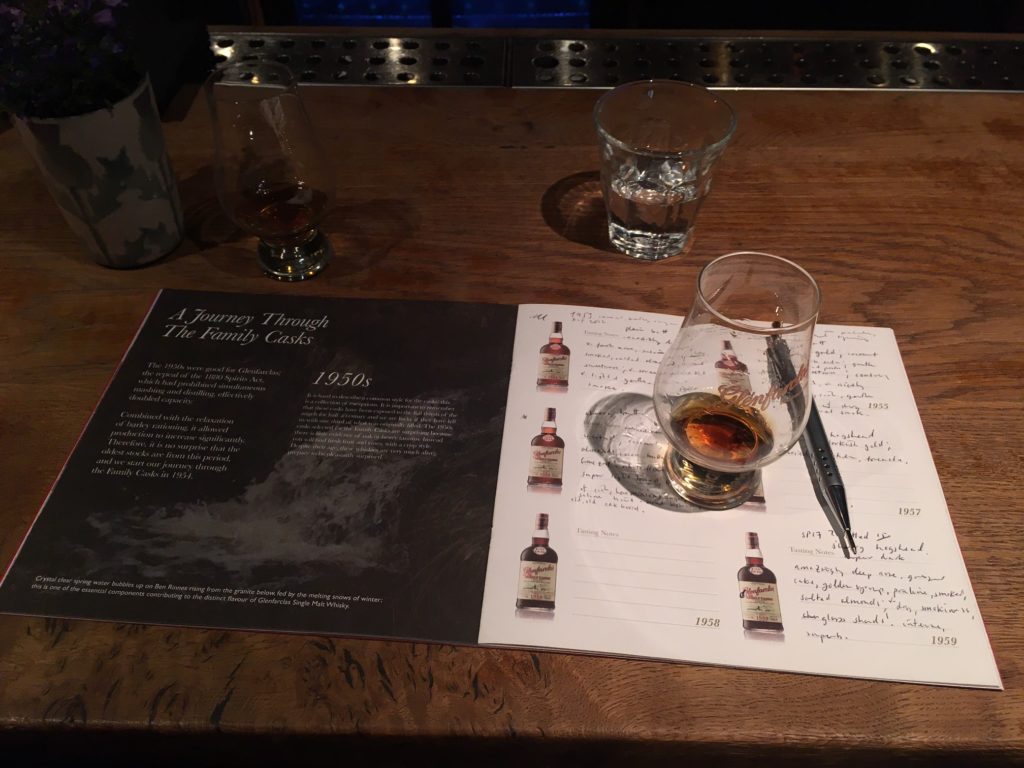 Ten years ago, at an iconic tasting held at London’s The Caledonian Club, Glenfarclas launched their now hugely successful Family Casks range. Covering over 50 years, each bottling is from one single cask, giving somewhere around 200 bottles. After countless new bottlings, and numerous re-releases, the range reaches a milestone anniversary. More importantly,  presents the opportunity to re-stage that classic tasting and celebrate the genius that is Glenfarclas. And, boy oh boy, what a tasting it was!

Glenfarclas is a distillery located in the Speyside region, near the village of Ballindalloch. It remains one of precious few distilleries to be family owned. In 1865, John Grant purchased the distillery and Recherlich farm for the measly sum of £511.19sd, as it was ideally located between their existing farm in Glenlivet and the cattle market in Elgin. It is still owned and operated by the Grant family: George Grant, 6th generation, leads the charge as their Sales Director, and chief exponent of Glenfarclas worldwide. He’s also quite a character!

With a large number of warehouses from expansion over their 150 years, Glenfarclas are in the unique position of having a relatively plentiful stocking of ancient barrels on their hands, a resource that can’t be matched by fellow Scottish distilleries. The Family Cask range has been created to show off this library of historic liquid, and allow whisky fans the world over the opportunity to purchase, taste, and above all, drink, some superb whiskies. A fantastic proposition in itself, but wait until you hear about the 10th Anniversary tasting…

Recently, at Mac & Wild on Devonshire Square, for a fleeting couple of hours, every single vintage of Glenfarclas Family Casks were open for a privileged few to taste. That is 48 whiskies, spanning 1954 to 2001, with a little under-the-table 1953 Glenfarclas making it 49, as if the line-up wasn’t plentiful already! To taste through all in two hours is a gargantuan task for a number of reasons: firstly, that allows for roughly just over two and half minutes per whisky, not including time to navigate the tables, and idle industry chit chat; secondly, Glenfarclas employ Sherry casks to their fullest effect, giving nutty, intense whiskies which, after 50 plus years, impart tonnes of astringent tannins. Imagine tasting very young Bordeaux, then add in an extra 40% ABV, and you’re somewhere close.

But, my word, this was astonishing. The variety of character on display over the several decade’s worth of whisky was stunning. Only the best casks are chosen, which are sometimes big first fill Sherry Butts and Hogshead imparting the strong sherry flavour, to 4th fill barrels whose sherry influence is tempered having been used several times previous. The result is some whiskies are super aggressive, assertive and rich, while others are delicate, subtle and almost evasive, but both styles equally belaying their years.

1956 possesses a hauntingly cool, fresh smokiness, reminiscent of beach-side bonfire, coupled with an almost floral, basil-like herbaceousness, and so stunningly fresh. 1960 was full of meaty, leathery sherry quality, and by far one of the most savoury on show, yet is typical of the decade. The 1970s exude honeyed, chocolate and raisin notes, not suggested by their light colour. My decade, the 1980s, is heavier still, with the 1988 standing out as particularly Christmas cake-laden, yet still light to the touch. 1992 and 1994 were joys, as was the 2001 which, although only 16 years old, is a brute with finesse, if such a thing is possible. Needless to say, I was blown away, even before considering the weight of history represented by these special liquids.

Glenfarclas more than anyone else embody and utilise the traditions that have led Scotch whisky to be one of the world’s iconic drinks. From the family history that runs through to the present day, the time-tested production techniques that impart that idiosyncratically Glenfarclas flavour, there is something special going on that will undoubtedly continue for many years more. Bring on the next decade and another tasting!

« A Day in the Life of Jeroboams Wine Director
Biodynamic – For the Better? »