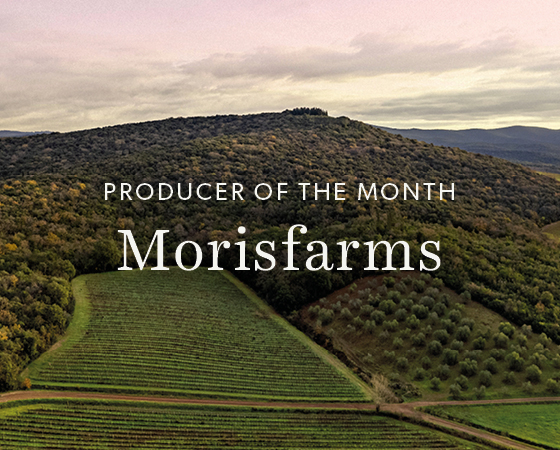 The Moris family left Spain two hundred years ago and settled on the edge of the marsh lands of the Tuscan Maremma. At the time this was a virtually unpopulated area, ripe for agriculture but with severe problems with malaria, indeed it was not until the 1950s that the disease was finally eradicated.

Until recently the Maremma remained a quiet backwater, beautiful and unspoilt, however the last 20 years has seen a huge increase in tourism in the area along with many new wine producers. The Moris family built up two agricultural estates (hence the farms in the name) totalling 476 hectares. The larger one, Fattoria Poggetti, is of 420 hectares in the Massa Marittima around 30 km south of Bolgheri, whilst the smaller one, Poggio la Mozza, is in Morellino di Scansano. In total 100 hectares is planted to vines, with the rest of the estate growing other agricultural products such as coriander, cereals and olives. The estate is also home to a magnificent 3,600 cypress trees, planted in great avenues in 1937 by Gaultier Moris who wished for the estate to be run as if it were a garden, a wish carried on by his ancestors to this day.

Like other farmers in the region, bulk wine was historically a staple part of the annual harvest but in 1977 the Moris family were amongst the first to realise the potential for also making fine wine here. It was in this year that Dr Adolfo Parentini married into the family and along with his wife, Caterina Moris, took over running of the estate and over the last 40 years the focus has shifted inexorably towards viticulture.

Parentini produced their first DOC wine, a Morellino di Scansano, in 1981 whilst the first serious wine from the Poggetti estate was made in 1988 and was christened Avvoltore after a Tuscan bird of prey that is found on the estate and it is now known worldwide as one of the great Super Tuscans.

The properties are now run by Adolfo’s son Giulio and his cousin Ranieri Moris, who have further driven the estate forward adding white wines and Rosato to the portfolio, whilst continuing the excellence of Avvoltore and their Morellinos.

Morisfarms is widely regarded as one of the best producers of the Maremma and whilst many Tuscan wines have risen to prices beyond daily drinking, Giulio and Ranieri are proud that their wines retain real value and grace the finest tables of Tuscany.